Puri is the most popular destination of Odisha where tourists visit in thousands every year. The holy city is also a part of four Dhaams. As a religious site, Puri is blessed with a number of ancient temples.

Apart from being a major pilgrimage center, Puri houses many other tourist hotspots. The wonderfully wide beaches, nice resorts and an array of tourist attractions make it a worth-visiting place. You can spend some time on beaches in the mornings and evenings, praising the beautiful phenomena of sunrise and sunset. Puri forms a part of the Golden Triangle Circuit of Orissa that covers Bhubaneswar, Konark, Gopalpur-on-Sea. 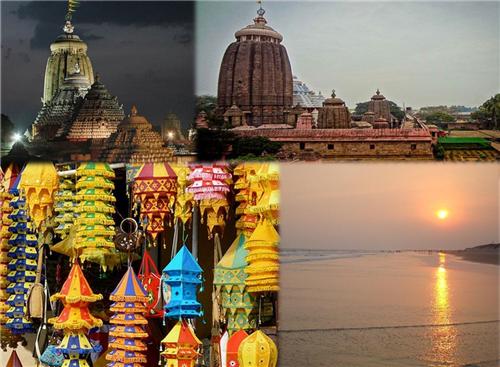 The Temple of Lord Jagannath was built in the twelfth century by Chodaganga Deva. The temple is the tallest in Odisha with a height of 65 metres. Before the main entryway, there is a 16-sided solid pillar known as Aruna Stambha, which is of 11 meters of height.

The golden beach of Puri holds the pride of being one of the most enjoyable beaches of the country. It has several popular seaside resorts. These beaches also hold religious significance as they serve as the site of celebration of some festivals. "Kartik Purnima", the full moon day of the lunar month of Kartik is celebrated here. This day, the Hindus come together early in the morning and take a holy deep, offering prayers to the Sea God.

The temple is dedicated to Goddess Gundicha and serves as a significant destination of Rath Yatra that is carried on annual basis in Puri. The idols of Lord Jagannath temple are brought here, they stay here for seven holy days. Thousands of devotees pay visits during this course. Rest of the year, the temple stays vacant.
The temple is surrounded with lush and beautiful gardens.

The temple dedicated to Lord Vishnu is located at Brhamgiri, at a distance of 22 km from the holy city of Puri. It is one of the important tourist attractions for Hindu pilgrims. It is believed that during the Anasara, when Lord Jagannath temple remains closed, the visitors can find their holy glimpse in the Alarnath Temple.

Loknath Temple is one of the well known places of Puri. It is located at a distance of just 1 km from the main temple of Lord Jagannath. The Loknath Temple was constructed in the name of Lord Shiva. Therefore it is also known as Shiva temple. The most important fair that is organized here is the Saranti Somobar Fair.

Swargadwar is a cremation ground for Hindus, which serves as a site where last rites of a person are performed. It is believed that a dip in the waters of the sea can help one to attain redemption. Several legends are associated with this place and so the place holds significance as one of the tourist destinations as well.

Situated on the national highway at 36 km from Puri, Pipili is a well known place known for the Applique work. There is a series of shops decorated with colorful pieces of applique work. These uniquely artistic pieces are exhibited and sold in good sum, in these shops.

Located at around 17 km from Puri, Sakhigopal is known for housing the holy shrine of Lord Krishna. It was built in 19th century. Here you will find an idol of Goddess Radha standing alongside a huge image of Lord Krishna holding the flute. These idols are very beautifully carved. The temple is a miniature version of Puri temple of Lord Jagannath.

Raghurajpur is around 13 km from Puri. The place is popular for creative Pattachitra art. Raghurajpur houses the Heritage Craft Village of Odisha. The village displays the Tassar, age old tradition paintings on canvas and other artistic things like masks, paper mache, sculptures, stone idols, wooden idols, and many more. The lovely mural paintings on the walls of the houses depict the past glory of Odisha culture. The overall ambiance of the village is pretty pleasant.

The Konark Sun Temple is one of the world-famous monuments, located at a distance of 40 km from the main city of Puri, on marine drive. While moving to Konark from Puri on the marine drive, one can also have scenic sights of temples like Beleswar and Ramachandi.

The Sun Temple is a stone house of brilliant architecture and art. In ancient times, the Konark served as a major site of worship of Sun God. It was known as Arka Kshetra and is mentioned in Sambha Puran. As per the Puranic tales, Sambha, the son of Lord Krishna, installed the image of Sun God and worshiped Him. He got blessed by recovering from Leprosy. There are many more tales associated with the Sun Temple.

The temple of Goddess Baliharchandi is located at a distance of 20 km from Puri. It stands on sand dunes near the sea and river Bhargavi. The place got its name from goddess ‘Baliharchandi’ who is revered as the incarnation of Goddess Durga. A heaven for nature lovers, the temple is surrounded with beautiful greens.

The name of Satpada is derived by combining two words, ‘Sata’ which means Seven and ‘Pada’ which means Village, hence Satpada is a group of seven villages all together forming an entire area which is named as Satpada.

Satpada is a lovely lake-side resort located on the southeast side of Chilika lagoon. Chilika is the largest brackish water lake in Asia which is located at a distance of 48 km from Puri.