Also known as Devasnana Purnima the world famous Snana Yatra of Lord Jaganath is a festival of bathing of the deities of Jagannath Temple of Puri. The festival of Devasnana Purnima is believed to be one of the most historic and oldest festivals which is still celebrated at the temple of Lord Jagannath at Puri. According to the mythological ‘Skanda Purana’ it is said that once king 'Indradyumna' who is believed to be the one who constructed the Jagannath temple at Puri started this festival of Snana Yatra, the bathing ceremony. The day of Sanana yatra is also considered to be the Birthday of the God of Universe, Lord Jagannath. On the full-moon day of ‘Jyeasth’ month as per the Hindu calendar the festival of Snana Yatra takes place at many other shrines of Odisha. The festival attracts many of pilgrims and visitors from all over the country to Puri during the festival and it is one of the important and elaborative celebrated festivals of Puri. 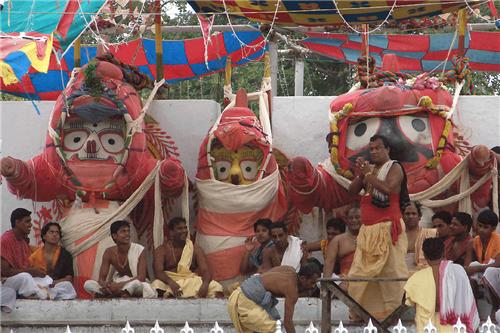 There are many historical legends and religious stories that are connected with the festival of Snana Yatra of Lord Jagannath. As per the mentions in a religious text written in Odisha known as 'Niladri Mohadaya' the festival of Snana Yatra has a special importance with Lord Jagannath and this festival is also known as the festival of ‘Purusottama’. Snana Yatra, the bathing ceremony is believed to be a tribal ceremony as this festival does not have its mention in most of the early religious texts, except a few. It is a festival that was celebrated by the Tribal community of Odisha which later on crept to the Hindu rites. In the early form Lord Jagannath was worshipped as "Nilamadhaba" by Viswabasu who was one of the 'Savara' chief. It is said that till today the 'Savaras' (tribal) and the 'Daitas' have the exclusive right to conduct the festival of Snana Yatra. On the last day of the Jyestha month the tribal communities known as "Saoras" which belong to the southern part of the state even today perform a rite to ceremonially bath the deities of Jagannath Temple. To perform the ceremony the holy water is collected from the remote jungles which remains untouched even from the shadow of animals. Lord Jagannath is believed to be a Savara God and hence the festival of Snana Purnima which was celebrated by the Savaras is now a part of Hindu festivals.

On the full moon night the festival of Snana Purnima is celebrated during the morning hours of the Purnima. The vessels filled of water are then carried to the Snana Vedi from the Bhoga Mandap. On the Snana Vedi the idols of deities are kept on a long procession in a single-line which is known as Jaladhibasa, a ritual of Puri temple. Before the bathing ceremony takes place the images are covered with silk clothes and are then tarnished with Abira, red color and Gulaal. With enchantment of ‘Pavamana’ the rituals are then performed and the water is also poured on the deities. After the shower the gods are then dressed altogether as they look alike the Ganesha, and this is known as the Ganrsha besa. It is believed that once upon a time a staunch devotee of the Ganesha visited the holy city of Puri and the king also gave him great respect and asked him to visit the temple of Jagannath with him, but he then said that he will not worship any other God except Ganesha. By any way he was induced and brought before the Snana Vedi. To the utter amazement of all, Lord Jagannatha was appearing as Ganesha and from that day the Snana Yatra, the sanctified shower is performed, the divinities are dressed like Ganesha. There are severallegends and stories being told and reasons allotted clarifying the Ganesha besa of the deities.

On the preceding day of Snana Yatra the idols of the deities of Jagannath Temple, Lord Jagannatha, Lord Balabhadra and Goddess Subhadra along with the image of Sudarshana are brought out from the sanctum ceremonially in a procession to the Snana Vedi, a Bathing Pandal also known as Snana Mandapa . The mandapa is made at a height so that the devotees can have the glimpse of the gods. The Mangala-Arti is performed at the Manadapa and after that the Suaras and Mahasuaras go in a traditional procession and bring the one hundred and thirty, vessels of copper filled with water from Suna Kua also said to be the Golden well). All the Sevayakaas cover their mouth and nose while bringing the water. At Bhoga Mandapa all these vessels are then preserved and purified by the Palla Pandas, a class of Brahmin priests with the Chandan, Jaba, Haridra, flowers, Aguru and Benachera along with the medicinal herbs and perfumes.

On Chaturdashi the fourteenth day of the month, the idol of the deities are then taken out in a huge procession which is known as the Pahandi Bije. Many of the scholars have given varieties of the terms to this event. Many believe that it is derived from the term Praspanda that literally means movement and many others also believe that it is derived from Pandya Vijaya.

The traditional paintings of gardens and trees are used to decorate the Snana Vedi. Several toranas and arches along with the flags are used to make the platform much appealing. The idols of the deities are also decorated with various flowers. Many verities of perfumes such as Aguru, dhupa etc are also offered to the deities. Beating of various indigenous drums and music accompanies the Pahandi of the deities to the Snana Bedi.Thousands and lakhs of devotees get crowded and pine for a glimpse of the deities in procession.

At the time of the holy shower the color painted on the pictures gets blurred and also fade. Seeing the wooden gods in stain the devotees might not have the proper devotional entail and may also have a feel of offensiveness. Thus the idols are instantly dressed as Ganesha in which they remain secured and covered. After the Snana Yatra, the idols of the deities are avoided visibility by the common public for a span of fifteen days and throughout that period the everyday rituals of the temple remain suspended. This period is known as Anabasara which implies the ill-advised time for the gods. It has been said in the past that the images of the deities are stained as an aftereffect of the sacrosanct bath. Throughout these fifteen days the Daitas (relatives of Viswavasu, the Savara) repaint the pictures and make enrichments. The duration of re-coloring and decorating the pictures is separated into seven small intervals, each of them being a two days span, and one-day is set to give the finishing touch ups. And the entire process thus takes one whole fortnight.

After completion of the 15 days the images are brought in front of the devotees on the 16th day, in a decorated form and newly colored. Nava Yaubana is said to be the new look of the deities, which means the new youth. The Nava Youvana is said to be the new youth as well. As per the popular belief if anybody gets a vision of the Lord on this day he washes away all his sins and hence therefore on this occasion a huge rush of people gathers in the temple. The performance of the rite of 'Chakshyu Unmilana’ which literally means opening of the eyes takes place and after that the Agamas and the Shilpa Sastras justify that the images become suitable for worship. During the Anabasara only the water mixed with cheese and fruits are then offered to the deities as it is said that the deities fall ill after the Snana yatra and hence it is the suitable food for them in place of the cooked food which is offered on a daily basis to the deities of the Jagannath temple at Puri.

Explore more about Lifestyle in Puri