* In case of any delay in receiving the OTP, you may verify it later. Please proceed without verification.

Your mobile number is not registered with us. Please register your mobile no.

Located at a distance of 10km from the main town of Puri, Raghurajpur is a village in the Puri district known worldwide for its known for its master Pattachitra painters, an art form that has its roots in the 5th century BC of the history of the state. The village of Raghurajpur is believed to be a home to number of creative artisans which are involved in the designing the absolute poetry on the treated cloth pieces and also on the dried palm leaf or paper. Raghurajpur is located on the banks of the river Bhargavi, an is a beautiful scenic attraction in the lap of nature surrounded with mesmerizing views of forests and trees of mango, palm and coconut. 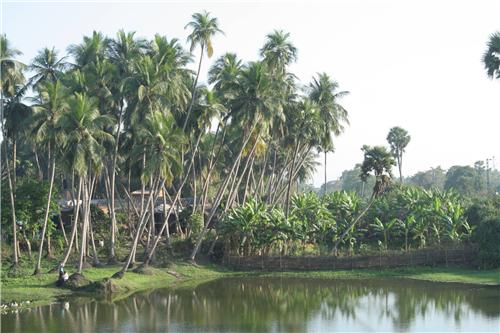 The houses of Raghurajpur village are as such that they are extended from the eastern part to the western part of the village, in proper rows which face each other. Bhagabat Tungi, the community meeting place along with the line of temples are present right at the centre of the rows of the houses. Goddess Bhuasuni is believed to be the presiding deity of this village and there is also a temple dedicated to her is located at the village. Also there are the temples of the several other gods and goddess such as Gopinath, Gouranga, Laxminarayan and Radha Mohan.

The Famous Art Work of Raghurajpur

Also known for the coconut-palm shade village of Odisha, Raghurajpur is said to be very much different from other villages of the State due to the Famous art work of Raghurajpur which has given this small village a complete new identity in terms of fame and revenue as well. The village is also a tourist attraction where tourists from all parts of the world visit and have their close understandings of the rich traditions of Odiya arts and crafts. 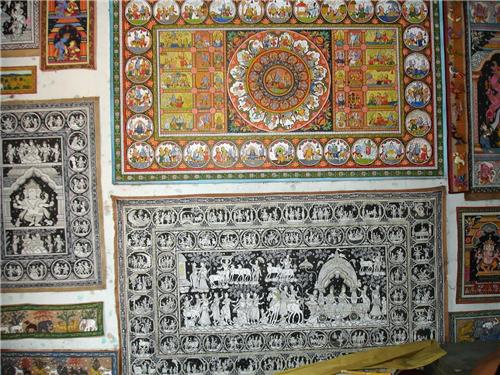 All other villages of Odisha where the visitors visit are for the purpose of either to understand the village lifestyle of Odisha but Raghurajpur is a hot spot for the diversified cultural resources which are found in almost every houses of the village.

A community of Artisans involved completely in the process of producing varieties of handicrafts items which include the paper mache toys, paintings of Patta-chitra, wooden toys, stone carvings, masks, palm leaf engravings, wood carvings, tusser paintings and the cow dung toys. About Raghurajpur it is said that it is one of such villages of the country where so much of art work is done and that too with such level of perfection. Every family of Raghurajpur is involved in the work of one craft or another. Some odd 120 plus households with more than 350 artisans in Raghurajpur are said to be engaged in theses art works. The village portrays some of the finest examples of traditional Odiya paintings and the art work, which is difficult to be found in this amount in any of the Indian villages. There is a famous saying about the village of Raghurajpur that, “Every villager of the Raghurajpur village is an artist and every house of Raghurajpur is a studio of these artists”.

The Pata Paintings or Pattachitra of Raghurajpur

The world famous Pattachitra Paintings also known as the pata painting of Odisha are ages old. Several cities and villages of Odisha are completely engrossed in these form of art including the cities like Athgarh, Champamal, Dinabandhupur (Dhenkanal), Parlakhemundi and Puri. There are special blocks where the houses of these artisans are situated which are said to be the Chitrakar Sahi which means the Chitrakar Lanes. Raghurajpur of Puri is the most famous amongst all the other centers of Patta-Chitra of Odisha.

The paintings of Pattachitra are made on the Patta, which are the pieces of clothes or the dried palm leaf. These are initially painted with a mixture of gum and chalk. Pictures of various Gods and Goddess are then intricate on these prepared colorful surfaces. The paintings are also made on the Sambalpuri Saris and the Tussar saris, which depicts several historical incidents such as the Ayodhya Vijay, Mathura Vijay and the Raslila of Lord Krishna with Gopis and Radha. These paintings of Pattachitra depict the true form of art of Odisha.

In the lunar month of Jyestha as per the Hindu calendar which is somewhere in the mid of May-June, the festival of Snana Purnima is celebrated at Puriand the rituals that are performed at the Lord Jagannath temple of has a deep connection with that of the Chitrakaras of Raghurajpur. During the Anasara period when the deities are not seen by the visitors, on the fortnight following the fullmoon day there are 3 pattis which are painted by these Chitrakaras of Raghurajpur which are placed at the temple near the main ‘singhasana’ of the deities. In order to execute the colorful paintings on the chariots of the deities of the Jagannath  temple during the car festival these Chitrakaras of Raghurajpur are again called up to demonstrate their skills and paint the chariots.

The Chitrakaras of Raghurajpur also produce paintings which are then sold at the Bedha Mahal inside the Jagannath temple premises and at the Chakada Mahal which is located outside Singha Dwara, the main gate of the temple. During the mid of the century these art forms are said to be have received a completely new face in the culture and tradition of the state. Only a few old men of around 90 Chitrakara families of Raghurajpur were ingaged in this profession during the mid fifties and around 1953 with the intervention of Halina Zealey, an American lady, a totally new prospect came up and these artists once again took out their colors and brushes. Although with the entry of the middle men in these businesses affected these chitakaras the most.

The Ministry of Tourism and the department of Orissa Tourism have identified this village as one of the most development seeking village of the state in order to render the Chitakaras and their family if Raghurajpur a right place and also to get them a life of dignity which they used to live some decades back. Union Minister of Tourism and Culture had made visits to the Raghurajpur village in the year 2002 and since then it was declared as the model for rural development of tourism in Odisha.

A non-profit organization set up in 1984 named as the Indian National Trust for Art and Cultural Heritage (INTACH) is preparing project reports about the village Raghurajpur and which will be implemented in the near future. Some of the most basic tourist amenities such as the suitable roads, sanitation, drinking water, interpretation centre and rest house etc are also under construction and are expected to come up very soon. The Odisha Government has taken several initiatives in order to develop the roads extended from the city of Kathapola and Chandanpur till the village of Raghurajpur and is also urging the United Nations International Children's Emergency Fund, UNICEF to provide the clean water in the village. Various Departments of Odisha Government of are congregating their resources to make this mission successful. After completion of the Rural Tourism Project, Raghurajpur will come under the National Travel Circuit of the Indian Government.

How to Reach Raghurajpur

Raghurajpur is connected with rest part of the state with roadways only. Being a small village yet a heritage site Raghurajpur finds a number of tourists from all parts of the world visiting the place every year. The closest Bus stop near Raghurajpur is the Chandanpur bus stop which is about 10 km from Puri and 50 km from Bhubaneswar on N.H.No.203. The highway connects the two important tourist destinations of the country Puri and Bhubaneswar. From Chandanpur cycle-rickshaw or walk on a 1.3 km on the scenic road can be the best mode of travel to reach the village. Cab services are also available to be hired either from Puri or from Bhubaneswar to reach the village.

Explore more about About Puri