On the day of Ashadh Sud Dwitiya, in July, the Rath Yatra celebrations start. "Rath" means chariot and "Yatra" means a journey or parade. The idols of dieties of Jagannath Mandir - Lord Jagannath, Lord Balaram and the Goddess Subhadra along with the divine wheel Sudarshana, are taken out of the temple to their individual chariots. The beautified chariots, are drawn by a huge number of enthusiasts on bada danda, to the great parkway of Gundicha Temple, about 3 km North. Post seven days stay, the holy idols are taken back to their homestead Srimandira. 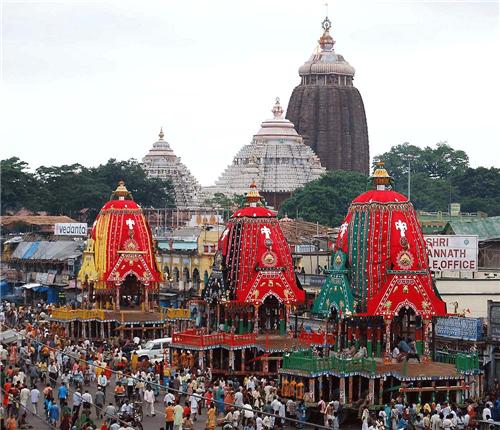 The preparations of the Rath Yatra start several months before its commencement. Every year the new chariots are made. The charioteer Sarathi, the stallions, Ghoda, the crowning component known as Kalasa and the Parswa devatas remain the same. The new chariots are made and this period is known as Navakalebara. The Forest Department of the Government of Odisha is responsible for supplying the timber wood as a raw material for Rathas or chariots without charging at all.

The Rath Yatra starts from Lord Jagannath Temple. It is carried as a huge procession followed by thousands of people. The Yatra is carried from street to street and reaches the final destination, Gundicha temple.

On the tenth day of the Asadha, the return journey of the deities of Jagannath Temple starts. This return journey or Yatra is known as Bahuda Jatra. During the Yatra, a pause is taken for a while to share poda-pitha, which is a kind of cake made of rice, jaggery, lentils, and coconut. Once the Yatra ends, the holy idols are decorated in gold adornments. This is known as Suna Bhesha.