The Jagannath Temple at Puri is one of the famous Hindu temples, established in 12th century. It is located on the eastern coast of India at Puri and is dedicated to Lord Jagannath who is worshiped as Lord of the Universe. The structure of Jagannath temple is based on a huge lifted platform. 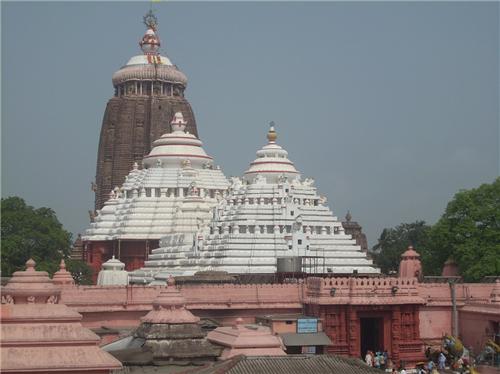 The premise of the temple is bounded by huge walls which are almost 7 meters high along with the platform. The temple has four gates facing four different directions. There are stone images of two lions on the east-facing gate which is called the Lions Gate (Singha Dwara). The west, south and north direction facing gates are known as Tiger Gate (Khanja Gate), the Horse Gate and the Lions Gate respectively. The logs of wood out of which the idols are fabricated are brought inside the temple from the north facing gate, when the Navakelevara ceremony takes place. The Lions Gate (Singha Dwara) is the main entrance of the temple.

Deities at Jagannath Temple of Puri

Lord Jagannath, Balabhadra and the goddess Subhadra are the three deities residing on a concrete podium which is known as Ratnavedi located inside the central chamber of Jagannath temple. The sacred Neem logs also known as Daru Bramha are used to make the idols of Lord Jagannath, Lord Balabhadra, Goddess Subhadra and Sudarshan Chakra. The idols of God Madanmohan, Sridevi, Sudarshan Chakra and Vishwadhatri, are also placed here. The deities are adorned in lots of jewels time to time as part of the rituals performed here.

According to historical evidences, Lord Jagannath's presence in Puri was identified during the times when Kharavela was the ruler of Kalinga.

As mentioned in the Skanda Purana, Lord Jagannath was initially adored as Lord Neela Madhaba by Viswavasu, a Savar ruler (a tribal king). The then ruler, Indradyumna, sent a Brahmin cleric named Vidyapati in search of Lord Jagannath, who was worshiped in thick forests of Viswavasu. Vidyapati could not discover the spot where the Lord was being worshiped. Finally he wedded the girl of Viswavasu, named Lalita. On Vidyapati's apeal, Viswavasu one day took him blindfolded to the cave where Lord Neela Madhaba was being worshipped.

Vidyapati dropped mustard seeds on the ground on the route to the hole with the lord Viswavasu which developed after a couple of days and helped him discover the cave path. He gave the data about cave to the King Indradyumna who visited that area to worship Lord Jagannath. But shockingly, he did not find the God there. He got very frustrated. Later, he had a dream in which a divine voice said to him to in regards to assemble the Temple of Lord Vishnu. Sri Narshima Murti carried by Narad was being secured in the Temple. He later on had an alternate dream in which he was administered to discover the fragrant tree on the seashore and make icons out of it. What's more the ruler discovered the log of fragrant wood on the seashore and afterward he created the icon of Lord Jagannath from it along with Lord Balabhadra, Goddess Subhadra and the Sudarshan Chakra was additionally made of it.

Lord Jagannatha temple at Puri was constructed by ruler Anangabhimadeva of Ganga dynasty. The colossal temple is based on a region of more than four lakhs sq. ft. It is bordered by a 20 feet high wall known as Meghanada Pacheri. An alternate divider known as kurma bedha encompasses the main Temple. It holds no less than 120 temples and shrines.

The temple comprises of four structures in particular, Vimana, Bada Deula sanctum sanctorum, the Jagamohan (the veranda), Natamandir (the lobby where people gather) and the Bhogamandapa (the corridor for food offerings). Vimana is developed in Pancharatha (Temple holding five Pagas or portions). It is called sanctum sanctorum or Garbhagruha and amidst the room there is Ratnasimhasana (the throne). The throne is four feet high.

The last is recognized as the primary passage. It is known as Jaya Vijaya door. The entryway edges of both the doors are resplendently beautified with Naga- Nagi figures. Navagraha figures beautify the upper architraves. Figures of Brahma and Siva on the southern door are more noticeable. The principle Temple has "Srichakra" (an eight spoked wheel) of Vishnu which is otherwise called the "Nilachakra". It is made out of Ashtadhatu. The temple tower is based on a stage of stone and, is feet (65 m) high above the internal sanctum where the Gods live.

Otherwise called the Bada Danda or the Grand Avenue, The Singhadwara which implies the Lion Gate, is one of the doorway to enter the Jagannath Puri Temple. It is named Singha Dwara on account of the two statues of hunching lions on both sides of the passage entryway. The Singhadwara opens on the eastern side towards the Bada Danda. There are 22 stairs made of solid concrete reaching the temple area. These are known as Baisi Pahacha. A symbol of Jagannath known as Patitapavana, which implies the "Saviour of the discouraged and the fallen" is painted on the right half of the passage. Right before the beginning of the Rath Yatra the idols of Jagannath, Balabhadra and Subhadra are taken out of the temple through this door.

Right close to the completely open region before the Lions Gate (eastern entryway), there is a sixteen-sided solid column which is about 10 meters in stature. This column is known as the Aruna Stambha. According to the Hindu mythology the Sun God’s charioteer is known as Aruna.

There is a gigantic kitchen in the premises of Jagannath Temple. It is known to be the biggest kitchen on earth. It is believed that the Prasad is cooked here, under the supervision of Goddess Lakshmi. There is a conviction by the people that if the cooked sustenance has any flaw, the shadow of a dog shows up, close to the kitchen. The main cooks of the Temple take it as the image of dismay of Mahalakshmi, after which the food is dumped under the ground and another cluster is cooked.

The cooking is carried out in earthen pots with water drawn from two special wells close to the kitchen, known as Ganges and Yamuna. The Mahaprasad that is cooked here and offered to Gods can be bought from Ananda Bazar, a market place inside the Temple on the North-east side of Singhadwara.

The temple remains ope till midnight during the festivals. On regular days, it opens at 4am.