There are many traditional old cultural institutions known as “Jagagharas” in Puri. The Jagaghara is a place where certain activities such as bathing in ponds, playing cards, relaxing, and spending time with friends are done. Most of these activities are carried on by males. The kids and young boys get involved in body building and wrestling, during this course, they stay away from females. A Jagagharas ought to have a temple and a tank. In these temples, the idols of Lord Mahavir Hanuman are worshipped. Lord Hanuman is considered the symbol of celibacy, dedication and physical strength. 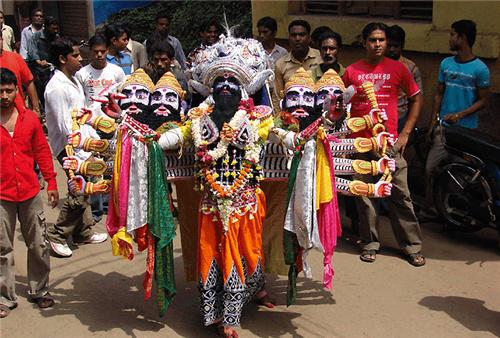 The Jaga Culture of Jagagharas was established in ancient times. Several historical evidences say that Jagagharas have played active role as paramilitary organizations.

Jagagharas are not popular among tourists. Jagagharas were formed by Sangas (friends), the group of people. In every street in Puri, one can easily notice one or more Jagagharas. Akhadas are said to be the apex bodies of all the Jagagharas. A Gandamala Jaga is one of the Jagagharas located at the Kalikadevi Sahi and another one is the Akhada at the Dakhinakali Temple. There are some 23 akhadas in Kundeibenta Sahi which are known collectively as the Pathara Akhada.

For the people of Puri, the Jagagharas are said to be the cultural centers where the traditional equipments like a bed for wrestling also  known as the Phulka, woods of various shapes and sizes such as the Mudgara, some musical instruments such as the Mardala and a tank with an open space are kept.

Dance forms such as the Gotipua dance and the songs such as the Odishi songs are also performed in Jagas. The sheltered trees, crystal clear peaceful water of the water tank and the cool and relaxing ambiance serve the purpose of these Jagagharas. Saanga (friends), Sangeeta and the Bhanga are known to be few mediums of having fun and getting entertained.

The procession of Chandan Jatra commences from Jagagharas only. All the members of Jagagharas take bath in the auspicious Narendra Tank. Later on they all go to the Jamunagadhua after Krushnajanma. Sahi Jatra is a street play which is performed during the Rama Navami.

The Sahi Jatra is said to be an amazing form of street play. On Rama Navami, the Sahi Jatra commences. These plays depict the birth of Lord Rama. The Sahi Jatra lasts as long for about a fortnight and during the night time several customary Sahi localities also take part in this magnificent celebration. The Sahi Jatra of any particular street begins its procession to any of its competitor streets or to the Balisahi. All members of the Jagagharas take active participation in the Sahi Jatras.

Explore more about Art and Culture of Puri