The Govardhan Matha at Puri is one of the oldest Matha of India. In 483 BC Bhagvatpaada Adi Shankaracharya established this matha at Puri with the aim of spreading the sanatnan dharma among the common public which is the extortion-free, unbiased and in harmony establishment. As per the Hindu mythology it is believed that Shankaracharya had established 4 monasteries which are known as Mathaas across the country. The singeri matha located at the top of the Sringeri hills located on the southern part of the country, Jyotish Matha at Badrinath in the north, Sharada Matha located at the Dwaraka coast in Gujarat at the western part of India, and Govardhan Matha at Jagannath Puri, Odisha in the east. According to the traditions commenced by Adi Shankaracharya Maharaj Govardhan Matha was held responsible for the Rig Veda. Adi Shankarchary appointed Shree Padmapadacharya as the first and foremost pontiff, also known as the mathadheesh of the temple. 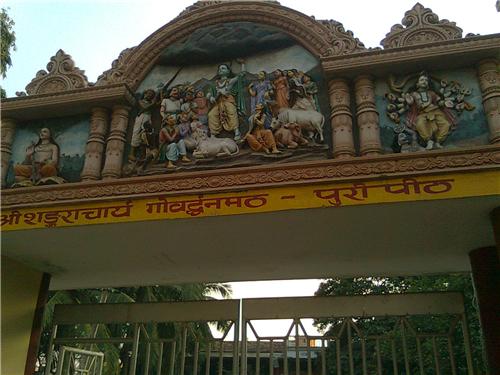 The Govardhan Peeth or Matha is said to have the most ritual places of the eastern part of county with its high importance. The matha is said to have its territory expanded from states of  Jharkhand, Bihar, Chittasgarh, Odisha, Andhra, Bangladesh, West Bengal, Mizoram, Sikkim, Nepal, Tripura, Bhutan, Meghalaya, Manipur, Uttarapradesh and till Prayag which also includes the Gaya and also the Banaras. In 483 B.C, of Shukla Dashami of the Vaishakha month as per the Hindu calendar, Sri Adi Shankaracharya reinstalled and restored the sacred statue of Lord Jagannatha and on that day itself he got his first disciple Shree Padmapadacharya who was then declared as the Jagadguru Shankaracharya for the Puri Peetha. Lord Govardhanath and Lord Ardhanarishwar were also installed in the Peetha and the seat was then got the transcendental wisdom. There are 51 Shakti Peetha in the entire world of the Hindu religion and of which the Govardhan Peetha is believed to be one of the most vital Shakti Peetha. As per the legends it is believed that the Peethas are the naval part of Goddess Bhagvati Sati which fellat various places of the India Sub-continent and on every such place a Shakti-Peetha were established.

The Deities of Govardhan Matha at Puri

Goddess Bhairavi and Lord Jagannath are the prime deities worshiped at the Matha. Prajnana Brahma is said to be the prime Mahavakya and there are the images of Ardhanareshwara Shiva and the Goverdhannatha Krishna which are also installed by Adi Shankaracharya.

Activities and Rituals of Govardhana Math at Puri

These are the two basic divisions of the Peeth which also has senior citizens as the higher posts of the Parishad and are preceded by the Jagadguru Shankaracharya Ji Maharaj himself. The Aditya Bahini is responsible for all the services towards the society such as the medical services, and the voluntary services.

The Adi Shankaracharya Govardhan Yoga-Vidyalaya: Several yoga Asans are being taught to the students at this Matha and the trained students then participate in the competitions of State level and the nationals as well.

The Shankaracharya Govardhan Vyayama-Shala: Vyayama Shala is the part of the Matha which trains the aspiring athletes in several forms of exercises.

The Shankaracharya Chikitsalaya: It is a dispensary which is operated by Govardhan Matha for the sake of health care of the tourists and pilgrims along with the residents of Puri. The services of the Matha are free of cost.

The Shankaracharya Govardhan Go-Shala: “Go Shala” is the word used for Cow Shed and the Shankaracharya Govardhan Go-Shala offers their services to around more than 70 cows. The services to cow here aren’t done to obtain the milk. This is completely services to these sacred animals as per the Hindu mythology. The Matha takes care of these cows, feeds them and also gets them treated during their ill health. The Matha also provides the pure Indian of Cows breeds to the farmers with the motive of developing their work and make them earn.