Puri is known for the most revered Jagannath temple that holds lots of significance, especially for the Hindus. People from all over the world, visit Puri to have holy darshan in the temple. There are various festivals celebrated in Jagannath Temple. 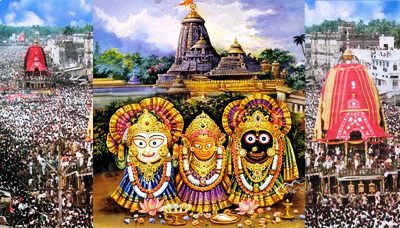 Rath Yatra or the Chariot Festival

The most important celebration is the Rath Yatra or the Chariot celebration, in the month of June. It incorporates a parade of three huge chariots carrying the idols of Lord Jagannath, Lord Balabhadra and Goddess Subhadra. The parade is carried through the Bada Danda which is the Grand Avenue of Puri till the last end at the Gundicha Temple. This is the event when Gods leave the temple and come out to the masses. The crowd being part of this celebration is numbered in millions.

Sunabhesha refers to the golden attire of Lord Jagannath. The Lord is dressed in this attire on the day when the deities return back to the temple after the Rath Yatra. It is a service where the idols of Lord Jagannath, Lord Balabhadra and Goddess Subhadra are decorated with brilliant adornments and golden jewelry.

A festival celebrated on the Akshaya Tritiya is known as Chandan Yatra. It marks the beginning of the development of Chariots for the Rath Yatra. These are the special wooden logs which are derived from forests in Odisha. According to a legend, the head Panda of the temple got a dream in which he is directed by Lord Jagannath to the area the wood of which is suitable for making the holy chariot of the Lord.

A celebration additionally known as Vishuva Sankranti or Mesha Sankranti is commended in the Puri Temple, during which a few very special customs are performed. A special juice called Pana is also made to be distributed among the devotees.

Snana Yatra is celebrated on Jyestha Purnima, the deities are bathed and decorated. After the shower by 108 pots of customarily purged water. The main icons of Lord Jagannath, Lord Balabhadra, Goddess Subhadra and Sudarshan head towards a mystery sacred place named Anavasara Ghar.

The devotees are not permitted to view them. The devotees head off to the adjacent spot known as Brahmagiri in order to have darshan of their God, as the structure of Alvarnath is said to be a manifestation of Vishnu. On Navayouvana, the devotees get to see the idols of deities of Jagannath temple. The day of Navayouvana is just a day before the day of commencement of Rath Yatra.

Nabakalevarais is celebrated during the alteration of one lunar month of Ashadha with the another lunar month of Asadha. This happens once in 8, 12, or even 18 years. The grand celebration of Nabakalevara is seen by a large number of ‘bhagats’ and devotees. On this occasion, new pictures of the Lords are established inside the Jagannath Temple. The old ones are entombed in the Temple premises near a place called Koili Vaikuntha.

The festival is celebrated for 16 days from the Ashwina Krushna Dwitiya to the Vijayadashami. As per the customs, the idol of Madhaba, also known as Durgamadhaba is toured around the temple territories for eight days. The following eight days, the idols are taken out of the temple to another temple closeby, Narayani Temple. After all the prayers and rituals, they are carried back to their seats inside temple.

It is the finishing day of the Rath Yatra that commenced on Asadha Trayodashi. It is an occasion when God Jagannath returns once again to His seat. Before entering the temple, rasgullas are offered to Goddess Lakshmi.

Explore more about Art and Culture of Puri