Business and Economy of Puri

Spread on a wide area of around 3000 sq km, the district of Puri is one of the famous pilgrimages of Eastern India. Being located on the coast of Bay of Bengal Puri is a tourist destination as well and the tourism has a great effect on the economy of the entire district. Most of the people are involved in this industry in a way or the other. Even though there are many small scale industries and medium scale industries are there in Puri which plays an exceptional role in forming the economy of Puri. Basically the economy of the holy city of Puri and the entire district is based on three segments, Tourism Industries, Handicrafts industries and the Cottage industries. 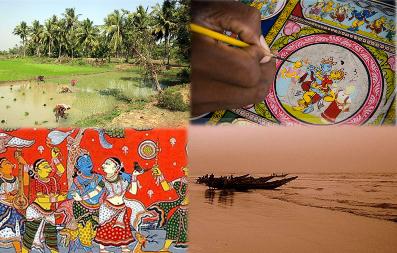 The geographical location of Puri also facilitates the growth of the fishing industries and many other related industries to it. The agro based industries, marine based industries, forestry units, and leather manufacturing units along with the tourism industry have emerged like anything in the recent years in the town.

Puri witness millions of tourists, visitors and devotees from all over the globe every year. The hotels and lodging industry of Puri finds a great amount of crowd in the season of Rath Yatra and several other festivals. This is the peak time of the year when the industry gets maximum returns and this remains most of the months. Puri being a holistic destination due to its historical importance, temples and beaches it is always the most chosen location for holidays and vacations hence boosting the local tourism industries. There are more than 400 hotels and lodging facilities in Puri providing comfort to the visitors to the holy city of Puri and its nearby places.

Handicraft and Cottage Industry of Puri

Another most vital factor that affects the economy of Puri is the Handicraft and Cottage Industry of Puri. This industry boosted up due to the tourism industry flourishing in the holy city of Puri because of the presence of the several tourist locations around the district. Lord Jagannath temple is one of the centre of attractions as well as the golden beach of the coast of Bay of Bengal attracts millions of tourist across the country and even from the abroad to visit Puri. The culture of Puri has also influenced the growth of the handicraft and cottage industry of the holy city of Puri.

Also the manufacturer of the textiles of the city plays an important role in contributing towards the cottage industry of the entire districts. Traditional saris and the dress materials made of the cotton and the silk most commonly known as the Kotki and the Bomkai are some of the most famous traditional outfits of the state of Odisha. Appliqué work done in the nearby places of Puri such as the village called Raghurajpur has also a great contribution towards the growth and development of the economy of the district. It also works as a factor of boosting for the expansions of the of the handicrafts industry of Puri. The decoration done on the clothes by using tiny mirrors and small pieces of colored clothes is also redolent of the temple art of Puri. There are several handmade and crafted products which have gained fame to the handicrafts industry, of which some are the wall hangings, de stitched magnificently designed umbrellas, bags, canopies and many such other utility items.

The traditional paintings of Patta-chitra are among the most unique art work of Puri. These are the cottage industry products of the city that has helped to a great extent in the growth and expansion of the entire economy of the district. These are the paintings done on the specially treated surface or patta of several structures such as the flowers, animals, mythological figures and many more. Pipili, a place near Puri is worldwide famous for the Art work done with the perfectness in designs. By etching the palm leaves and stitching all of them together in rows paintings of the traditional set of 96 circular playing cards are also done at Pipili. These are the card known as the Ganjappa, which are believed to the finest examples of the traditional handicrafts of Puri.

The delicate filigree works is also one of the attractions of the Puri handicrafts. Decorative trays, exquisite jewelry containers, the cigar boxes, and several other items of silver filigree are believed to be some of the best art works in the world. Also the stone carving, bamboo work, the lacquer work made with sea shells and the artifacts are also some of the most popular products of the Cottage and Handicraft Industry of Puri.

Handicrafts, rice milling and fish catching are the activities that encompass the small scale industries of Puri which are believed to be very much of the consumer slanting. More than a thousand officially registered small scale industrial units operate at Puri. Along with many other unregistered and unofficial units that are also involved in the production process. To bring the face of these small scale industries a lot of initiatives are undertaken by the Government of Odisha. In the year 1978, a separate unit named District Industries Center (DIC) has also been formed which work as a regulatory body as well as provides assistance to the artisans and traditional craftsmen in order to maintain their livelihood and also to make their work reach the markets across the state. Many of the artisans due to the lower interest of people in these traditional handicrafts and products started quitting this ages old art work and started adopting other professions which are also now re-habilitated by the initiatives of Odisha Government.

A major part of the small scale industries of Puri contains the food items manufacturers. These are the agro based firms which are involved in the manufacturing of the food items such as the pickles, snacks, cashew processing, ice-creams, jams and jelly, molasses, coir and many such products. There are also several sea based industries at Puri which are engaged in the processing of prawn pickles along with the dry fish. Leather based products such as the leather shoes, belts and bags are also manufactured by several small scale units located at Puri. There are also forest based industries in Puri involved in producing some of the products like wooden furniture, Sal seed oil, bamboo sticks, ethyl, sisal rope and bee keeping is also a part of it. Extractions of edible oils from rice along with the rice milling are also some of the emerging small scale industries of Puri.

Due to the presence of the golden beach on the coast of the Bay of Bengal at Puri the Fishing industry has got a great boost and has also been one of the important factors contributing towards the Economy of Puri. Fishing, processing, packaging the various sea fishes, prawns, crabs are some of the common small scale industries of the city of Puri. Special communities of Puri known as Nulias which are engaged in the work of fishing are the some of the main contributors towards the fishing industry in Puri.

Other than all these industries the low investment industries also have grown in large numbers due to the support of the Government as well as the tourism in the districts of Puri. The industries involved in the work of handicrafts, stone carving, horn carving and the handlooms are also the industries which have reached a completely different level in these years due to the increased amount of tourist into the district.