Puri is a coastal district on the eastern part of Odisha, which is also known as Jagannath Puri. It is known for Lord Jagannath’s temple which is located on the beach side. It is one of the Char Dhaams. ‘Dhaam’ is a Sanskrit word which means “abode” and it is believed that Puri is abode of the Lord. In India there are four important dhams namely, Badrinath in the north, Dwarka in the west, Rameswaram in the south, and Jagannatha Puri in the east. Puri also serves as the site of Govardhana matha, which is one of the four cardinal institutions established by Shri Adi Shankaracharya ji Maharaaj. Other three are at Sringeri, Dwaraka and Jyotirmath. 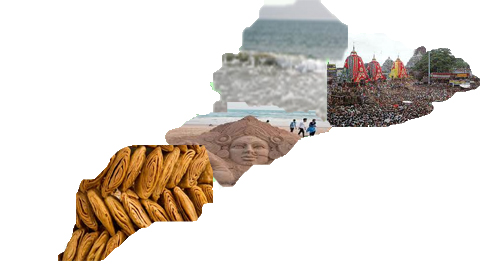 Located at a distance of 65 km from the state capital Bhubaneswar and on the coast of Bay of Bengal, Puri is one of the most famous tourist places of the Odisha. Puri offers the visitors a plethora of tourist attractions along with the holy Jagannath Temple. It is blessed with ancient temples, rich cultural heritage, sandy beaches and exotic wildlife. Every year millions of tourist visits this holy city from all parts of the world to enjoy its magnificence as a tourist place.

In the early 19th century A.D. the entire province was divided into two divisions, Southern and the Northern Divisions, river Mahanadi being the border for both the regions. Later on in the mid of the 19th century both the regions were combined. In 1936 Odisha became a separate province. After the integration of several feudatory states of Odisha namely Khandapara, Daspalla, Ranapur and Nayagarh which took place in the 1948 a whole new district was formed which was named Puri.

As per the legends, it is believed that the image of Lord Jagannath was found beneath a fig tree which impressed a King and he decided to erect an idol of the Lord on that site. There are numerous smaller temples and shrines within the temple complex which sprawls over an area of 400,000 sq ft which is  surrounded by a high fortified wall.

The Puri sea beach is one of the famous beaches since ancient times. It is believed that the beach was once used for the business purpose with the south eastern countries. At Puri beach sea shells are collected in large numbers which serves as the main wealth of the beach. The different types of fishing boats made of solid tree trunks which are enormously heavy are seen adorning the beach. On this amazing site, Puri Beach festival is held annually and plays host to an array of beautiful sand art display. The variety of superb pieces of art carved out from the sands adds delight to the eyes of the discerning travelers. The beauty of the sky in radiant colors, the roaring waves and golden sands allures the tourist a lot. The enjoyment of peace during the sunrise and sunset at the beach of Puri has its own mesmerizing effects. Crowds in thousands can be seen from the early morning to the late nights on the beach.

Geography and Climate of Puri

Puri is located 19.8°N 85.85°E. Its altitude is at exact sea level. Due to the closeness to the Bay of Bengal Puri experiences a tropical climate. The summer season at Puri is during the months from March to June. Monsoon appears to be in the months of June and lasts till September and the winters at Puri are during the months of October till February. Minimum temperature of Puri is measured to be approximately around 16.45 degrees Celsius where as the maximum temperature is around 33.9 degrees Celsius. Due to the exceptional geographical position of Puri visitors visit here during every months.

The economy of Odisha is based on agriculture and Industries related to cottages, garments and handicrafts. Handicraft and cottage industries of Puri are known across the globe. The sources of these industries are believed to be the temples of Lord Jagannath and Sun temple of Konark. The most important products of these industries are the patta chitra, wood carvings, appliqués, modern patch work, terracotta, sea shell items and bell metal etc. The government of Odisha has established several facilities to promote these industries. The District Industries Centre provides regular training and upgrading the skilled people and opening up the chances of earning a better amount for themselves and leading to the increase in the per capita income of the entire district. Among the crops cultivated in the Puri district wheat, mung, paddy and groundnuts are some of the major crops. The Government of Odisha has introduced several schemes in order to promote the handicrafts and handlooms industries of the district. Various training schools training centers have been opened by the state government to train and educate the skilled craftsmen.

Art and Culture of Puri

The culture heritage of Puri district has its roots in the 3rd century BC. There are people of several communities and religions reside here with the communal harmony maintained. Several festivals and fairs are being organized in the entire district all across the year and the contribution of people belonging to every religion can be seen during these festivals. The mastery in the architecture of Puri can be seen clearly in the temples and monuments of the city. The art work of Pipli is world famous and the mirror work being done on the home decorative items are the major attraction of the district. The stone sculptures, palm-leaf paintings, patta chitraas, pottery toys, sand art, applique works and paintings are some of the other most famous art work of Puri. Puri is also the pioneer institution in the field of theatrical performances and Opera is a popular mobile drama troupe. Oriya being the major language spoken and written in Puri is also the official language of the district. Since Puri is one of the busiest tourist spot English and Hindi are also being used widely across the district in order to communicate with the tourists visiting the city.

Puri is the holy city of Lord Jagannath believed to be residing here. Apart of the World famous Lord Jagannath Temple there are several tourist attractions all over the entire district of Puri. Chilika Lake, Sakhi Gopal, Konark Sun Temple, Goddess Harachandi temple, Ramachandi Temple and Satapada are among the most favored tourists destination across the Puri district. The tourism industry of Puri provides the best lodging and hotels facilities in order to accommodate the tourists visiting from various parts of the world.

Puri is a religious city of the state and hence the festivals are very common over here. Of all the festivals celebrated across the year the holy Rath Yatra (Car festival) of Lord Jagannath, Chandan Yatra, Sahi Yatra, Gosani Yatra, Magha Mela, Maha Shivaratri and the Boita bandhana are some of the most famous festival of Puri. Many festivals are organized by the government of Odisha and many other organizations in order to showcase the Odissi dance and different folk dances. The famous Konark Beach festival, Puri beach Festival, Gundicha Utsav, Srikhestra Mahostav are some of the few festivals organized by the local bodies and Government of Odisha.

Puri has a variety of cuisines for the visitors visiting the city every year in millions. Varieties of Vegetables, sea foods, and sweets can be found at Puri. The most important food at Puri is the ‘Mahaprasaad’ which is offered to the Lord Jagannath as Bhog and then being made available for the common public. There is a saying about the Mahaprasad is that, it never ever falls short in serving the visitors let the number of visitor be in millions or even more than that. The market area where the Mahaprasad is available is known as the Ananda Bazaar, and it is the premises of the Jagannath Temple itself. Among other food cuisines all sort of vegetarian and non-vegetarian dishes are available at Puri.

How to Reach Puri

The Holy city of Puri witness millions of visitors every year and there are several modes of transport available that connect Puri with rest part of the world.

By Train: Puri is a terminus on the East Coast Railway which has direct express and super fast train linked with several major cities of country like New Delhi, Mumbai, Kolkata, Okha, Ahmedabad, Tirupati and many more. The Khurda Road junction is nearly about 44 km away from Puri and is one of the most convenient terminals that connect trains coming from all directions in India. The Puri Railway station is located at the northern part of the city which can easily be reached by cycle richshaws, auto richshaws, town buses and taxis as well.

By Road: The bus stand of Puri is located near the Famous Gundicha temple and it connects to all the major cities of the state such as Cuttack, Bhubaneswar, Rourkela and many more. Minibuses to Konark are also available at the gap of every 10 minutes from Puri. Metros like Kolkata and Chennai are also connected to Puri with roadways and services can easily be availed by booking tickets on website of Orissa Transport board, OSRTC.

By Air: Biju Patnaik International Airport at Bhubaneswar is the only nearest airport to reach Puri. Although there are plans to have a domestic terminal at Puri to provide convenient services for the tourists.